History of the Priory

Home > The Priory > History of the Priory

The Saint Rémy la Varenne Priory history: from the tenth century to nowadays

Gift certificate (dated 929): Foulques 1st said the Roux yields to the abbey Saint Aubin d’Angers (Order of the Benedictines) an area that the Counts of Anjou owned on the banks of the Loire. This place, then called Chiriacus, will become Saint Rémy la Varenne.

A small religious community settles there and builds the first buildings:

Some are devolved to spiritual life:

• Parts of the church that was then only a chapel.
• Chapter room and its crypt.

Others are related to agricultural activity:

Towards the middle of the century, the realisation of a fresco in the chapter house. One of the oldest in Anjou.

The Priory is known to be one of the wealthiest profits of Anjou. It derives its prosperity from the agricultural and pastoral activity, the concession of certain parts of its domain against royalties, donations and rights on the boats which transport goods and people from one to the other bank of the Loire.
Expansion of the church: choir built between the twelfth and thirteenth century.

Establishment of the system of the Commendam: in modern terms, it would seem today that the Benedictine Community entrusts the management of the domain to people (notables nevertheless) who no longer belong to the monastic order.

Probable edification of the east tower and the adjacent gable of which one of the rooms is entirely painted, however, it is currently covered with several layers of whitewash.
Many polls reveal a vegetal decoration and friezes (chimney).

Priors of great stature give the estate a special glow. We will quote:

• Mathurin Legay de la Hamonière
• Those of the Saint Offange family (4 Priors)
With them, the Priory is deeply reworked and enriched with architecture and Renaissance decorations.

• Construction of the so-called Legay tower
• General raising of the main building with tufa facings (the extra height is probably anterior, but it was made of half-timbering).
• Mullioned windows.
• Large skylights square pediment topped with carved gables.
• Busts were protruding, both in North and South facades.
• Monumental fireplace entirely carved and richly painted (rare polychrome fireplace).
• Many decorative paintings (beams – walls).
This splendour and this pageantry illustrate the metamorphosis of the Priory which, from the initial monastic state, becomes “Châtellenie” while the Prior acquires a status of “Lord”.

The North facade undergoes some reworking:

By the French Revolution, the Priory was decreed National property. Various owners follow one another.

Some modifications are made to the building during the nineteenth century:

• The realisation of a terrace, North courtyard, where was planted a Sequoia which will become gigantic and whose presence – with 5/6 meters of the facade – will threaten the building. He will be cut down in early July 2002.

Various families, who rent there, inhabited the Priory.

1000 years of history to discover at the Priory of Saint Rémy la Varenne!

The Priory is a listed building, within Saint Rémy la Varenne, along the Loire river. The Priory is open to everyone and benefits from numerous assets.

The Priory is also a unique area of freedom and wellbeing within a park planted with trees. The site invites to meet each other, exchange experiences and promote talents of everyone.

What is a Priory?

A Priory is a rural estate bequeath to an abbey, headquarter of a monastic community. It is composed of meadows, woodlands, and crops. There are often mills and smallholding whom taxes increase the Priory incomes.

To manage the estate, religious build buildings where they often establish on a long-term basis, with a prior, leading a group of monks.

Prior comes from the Latin ‘prior’: first, as the meaning of leader. A ‘Priory’ is so an estate managed by a Prior.

Who were the monks of Saint Rémy la Varenne?

At late Xth century, the Count of Anjou evict theme and settle Benedictines.

Within the Christian religion, there are several monastic communities, each strictly following precepts, called ‘rules’.

Several ‘rules’ exist, each enacted by a religious founder, or directly inspired by its life. In this way, Saint Benoît (born in Nursie, Italia, around 480), inspired the Benedictines.

Numerous successors over the years…

Benedictine Monks that build the Priory lived here at least up to the XVth century (after that it became really uncertain). Since the XVIth century, the Priory become a manor belonging to a lord. Up to the French Revolution (1789), it was a seigniory with all the characteristics of the Ancien Régime.

Sold as ‘National Property‘, it becomes a kind of old manor, belonging to several privet owners. In 1989 the Saint Rémy la Varenne municipality bought the Priory. Buildings show the pieces of evidence of this long history; it is why their reading is complex and fascinating.

Indeed, the different occupants of the Priory (since XIIth century) worked to modify the building using the already build parts. They also had to compose with the hustle and bustle of history (the Hundred Years’ War, religious wars, the French Revolution…) and with the environment modifications (building of the Loire dyke: “La Grande Levée d’Anjou’ and the famous Loire floods).

So, you can now enjoy a melting pot of all these influences, as a complex web… that we offer to sort out. 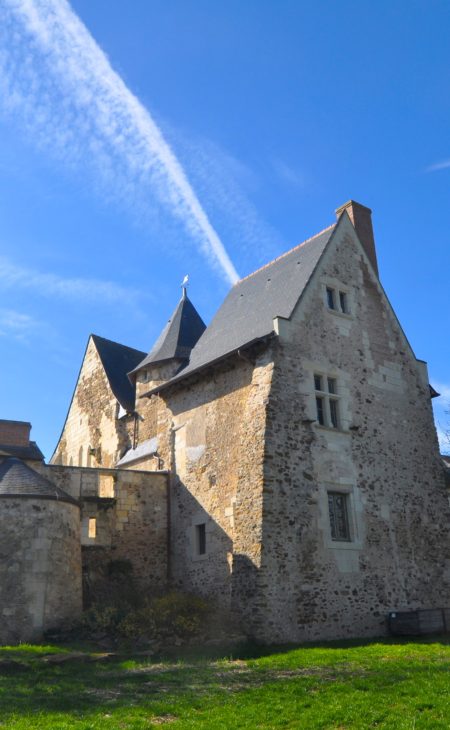